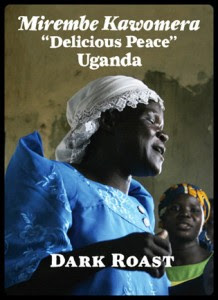 See the previous blog post for details regarding this boycott of Ugandan Coffee. The boycott is a response to Uganda's draconian "Kill the Gays" law, which is expected to pass Uganda's parliament in the next few weeks.

To the list of coffees included in the first post, please at UGANDAN DELICIOUS PEACE COFFEE. This coffee is currently distributed in the United States by the Thanksgiving Coffee Company, located in Fort Bragg, California. The motto for this coffee is "Not just a cup - but a JUST cup." However, there is no justice at all in Uganda for gays and lesbians.

Drop this business a note or call them to tell them you why you will not buy their product and that they're supporting a homophobic and oppressive government. 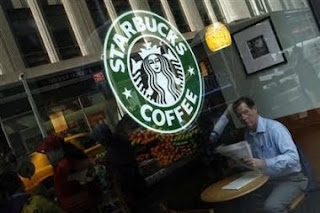 Uganda is on the verge of passing a horrific new law that would sentence gays and lesbians in that country to death or life inmprisonment. It would sentence people who know homosexuals and do not report them to three years in prison. Rachel Maddow has covered this proposed "Kill the Gays" law extensively on her program, and news stories about this massive human rights violation are all over the internet. This law has not yet passed the Ugandan parliament, but no one doubts that it will.

What can we here in America do? Uganda's national budget is extremely dependent upon foreign aid, and the United States provides a large portion of that aid. Contact your legislators and senators. Insist that they take notice of what's happening in Uganda and urge that, if this law passes, all American foreign aid immediately be discontinued.

But we can do more. We can boycott Uganda's largest export product, and that's coffee. Particularly, it's coffee made from Robusta and Arabica coffee beans.

Do not buy coffee labeled Robusta or Arabica without consulting the label. These are the two primary types of coffee grown in Uganda. If the label says Uganda, put it back on the shelf and inform the store owner why you will not buy it.

Starbucks is a huge purchaser of Ugandan coffee. Let your local coffee shop know about this law. Inform them that you won't be buying any coffee product from Uganda. Ask them to discontinue that coffee.

Dean & Deluca, an upscale specialty store with locations in many major cities, carries a variety of Ugandan coffees. 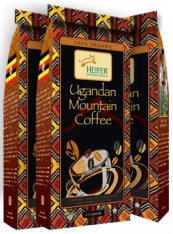 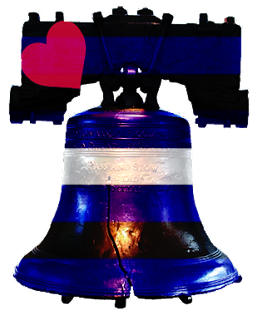 HOUSE OF HATE AND BIGOTRY 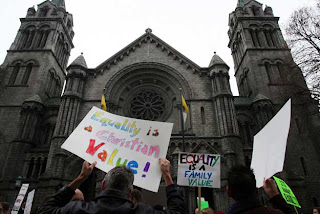 Over 150 protestors showed up this past Sunday at the St. Louis Cathedral Basilica after learning that the archdiocese donated $10,000 to defeat same-sex marriage in Maine. The protesters included a 90-year old woman with two grown lesbian daughters and a 10-year old girl there to defend her lesbian mother.

Also attending the rally was Jacob Piwowarczyk, 21, of St. Louis, who showed up with a badly injured eye and an arm in a sling. He and two friends were attacked by four men in the parking lot of a gay bar early Saturday morning in what he called a hate crime.

"Are the Catholic dollars placed in the offering basket behind us not private? Do you tell the donors what you are doing with them?" organizer Ed Reggi of Show Me No Hate told the crowd. "Why not fund love, archbishop?"

St. Louis Archbishop Robert Carlson released a statement in response to Sunday's protest, saying the donation came from a "special needs fund" supported with "private gifts" that is not used for formal operations. The fund is used at the archbishop's discretion, so responsibility for this act bigotry lies directly at Carlson's feet.

Show Me No Hate, the group responsible for organizing the protest, wants same-sex marriage legalized in Missouri. They plan to rally outside the New Cathedral every Sunday throughout Advent, a twenty-five day period straddling the Christmas holiday.

The Roman Catholic Church led the successful charge to overturn a law that would have made Maine the sixth state to allow same-sex marriage. Leading up to the Nov. 3 vote, 45 dioceses around the country contributed a total of $180,550 to the effort, according to campaign finance records.

Tax-exempt religious organizations are not allowed to participate in political campaigns for candidates, but they can "engage in advocating for or against issues and, to a limited extend, ballot initiatives," according to Internal Revenue Service regulations.

It's very much past time work to toward stripping churches, especially the Catholic Church, of their tax exemptions. The Catholic Church has become nothing more than a right-wing political action committee and a hate group. They recently attempted flat-out blackmail in an effort to stop a Washington, D.C. city council vote on same-sex marriage.
Posted by Storm Christopher at 5:18 PM No comments:

Last month, the citizens of Maine voted away the marriage rights of Gay people. Today, we were handed another heart-breaking defeat in New York. Maybe it's time to remind people of the real lives these votes are affting. Especially, let's remind merchants in your area of the Gay Community's spending power.

Do you want to protest the discriminatory laws and policies that make us second-class citizens? Maybe you can't take to the streets but would like to make some kind of quieter statement?

Take out a pen or magic marker and write "Gay Dollars" visibly on every dollar bill in your wallet or purse. Encourage your friends to do the same. And keep doing it. Put these bills into circulation and let the message pass from one hand to the other. They say that money talks in this culture. So let your money speak for you.

Not quite comfortable with handing your grocer a bill marked "Gay Dollars?" Then take up that pen or magic marker and write "Equality Now!"

Just Do It.
Posted by Storm Christopher at 4:00 PM No comments: 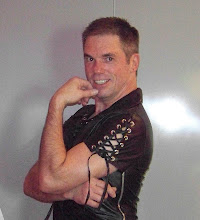